About Us Since you clicked here

The purpose of forming a union was to unite musicians of Reno and the vicinity for better protection of their interests, to regulate wages and all business connected with the musical profession, and to enforce good faith and fair dealing between its members. Membership was open to all instrumental performers who had been residents of the area for at least 30 days (later changed to 90 days) and who were approved by the Board of Directors. Honorary membership could be awarded to eminent composers or instrumentalists, or any other non-professional who had distinguished himself to the benefit of the Union or musical profession.

The Union was under the leadership of its officers: president, vice-president, secretary, treasurer (later combined into the secretary-treasurer), three trustees, an eight-member Board of Directors, and a sergeant at arms. Based on information found in the collection it appears that the secretary-treasurer was a full-time position and carried out the everyday activities of the Union.

Prior to 1950, the Union met at the Labor Temple at 440 N. Virginia Street. Union members voted in June of 1950 to buy the buildings and property at 120 W. Taylor Street. The current union hall was built in 1962-63 at 124 W. Taylor St. Over the years the building was shared by the Musicians Union, the Reno Musicians Federal Credit Union, and presently, the Hotel Employees and Restaurant Employees Union Local 86.

Union members twice organized a credit union for members; the first was prior to 1964; the second existed from 1964-1973. A more complete history of the Credit Union can be found in the section of this guide which describes Series 5, Reno Musicians' Federal Credit Union.

Throughout its history, the Union has taken very seriously its constitutional charge of securing and providing for improved wages, hours, working conditions, and other economic advantages. It has been able to do so through its organization, rules, regulations, negotiations, binding arbitration, collective bargaining, and threat of strike.

The records of the AFM, Reno Local No. 368 were donated to the Special Collections Department in 1991 by Sam Folio former President of Local 368. The collection dates from 1909-1910 and 1930-1984 and has a volume of 42 cubic feet. There are no restrictions on access to these records.

The collection is relatively complete for the period 1960-1984, and well represented from a financial aspect for the years 1930-1960. All activities of the Union can be documented through the minutes, alphabetical files, stewards' reports, grievances, and collective bargaining series. Not only do these records chronicle one facet of organized labor in Reno but they also pull together in one location, documentation about the entertainment industry in Reno, particularly in casinos, through the stewards' reports and collective bargaining series.

The arrangement of this collection follows the original order as created by the Union. One of the largest series, the Alphabetical Files, contains both correspondence and subject files which would normally be divided into separate series. Correspondence is located in several sections within the alphabetical files; some may be found under "Correspondence" and some under the name of the sender, such as "AFMCorrespondence" or "President's Files-Correspondence." The content of the correspondence files is both local and national in scope, as the Local often referred issues and conflicts to the parent body for resolution or clarification. Other correspondence between the Local and individual members, deals with day to day operations, rules, regulations, and other details of Union membership.

These papers provide evidence of the evolution of casinos in Reno and in particular, the type of entertainment they offered to visitors. In general, the trend was a change from many casinos offering their visitors "big name" entertainment, to only a few operating such venues. This change in the entertainment industry had repercussions on the local economy, professional musicians, and the Musicians' Union as well. Casinos with showrooms hired "house bands" to provide the accompaniment for their headliners; as showrooms closed and casinos economized, fewer positions were available to union members and less income accrued to the Union from work dues.

One of the most important topics featured in this collection is that of the role of trade unions in Reno. The labor movement in Reno has a spotty history; strong in the years prior to the Great Depression of the 1930s and weaker since then. Nevada's status as a "right to work" state complicates the Union's goal to make the Reno entertainment industry a "union shop." Collective bargaining issues in this collection clearly illustrate those goals, as the casino industry tried numerous times to weaken the Union by refusing to bargain collectively, or by asserting that the Union could not legally represent musicians. Both the Alpha Files and Collective Bargaining Series provide illustrations for these trends.

While growing up in the wild, wild, west of northern Nevada, John Shipley, at four years of age, put away his cowboy hat and began diligently studying piano. Today his multiple hats are those of an innovative jazz pianist, conductor, arranger, songwriter, producer and recording artist. As a founding member of the groundbreaking Japanese jazz/fusion recording group "Hiroshima", he fell for the eclectic jazz influence and ultimately developed his current recording style. Currently John is the Musical Director for the Motown Rhythm Section “The Funk Brothers”. This band played on over 150 #1 hits during Motown’s heyday and recently received a Star on the "Hollywood Walk of Fame". 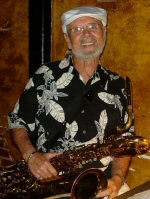